In hopes of expansion, The Main Disch has now moved to www.BoldVentureMedia.com ! Check it out!
Posted by Zach DiSchiano at 4:25 PM No comments:

The Eyes of Texas 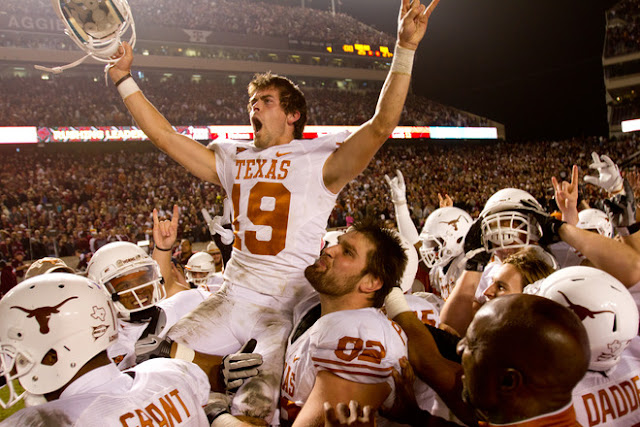 Kyle Field seated the second-most fans in school history on Thanksgiving night, and all 88,645 attendants got to see the Texas Longhorns beat the Texas A&M Aggies in what could be the last-ever Lone Star Showdown. Texas trailed early in the game, but eventually came back and won on a 40-yard field goal by Justin Tucker in the final seconds of the game.

The only thing Texas seemed to do right was play defense. Carrington Bydom, Kenny Vaccaro and Quandre Diggs all had interceptions while the Longhorn defensive line consistently applied pressure on quarterback Ryan Tannehill. Offensively, the burnt orange and white couldn't convert a third down for anything, but thanks to a Bryan Harsin trick play and a power run by running back Cody Johnson, the Texas offense was able to produce two touchdowns. The defense took the reigns from there, scoring a touchdown and limiting the Aggie offense to 25 points - a performance that wasn't perfect, but just enough to get out of College Station with a W.

It was the same story for A&M. Off to a hot start, but in the third quarter the Aggies allowed 17 straight points and lost all momentum. Ryan Tannehill looked confused and nervous and the Texas defense was able to capitalize on the senior quarterback's uncertainty.

The Aggies will now head to the SEC with a bad taste in their mouths. They'll be losing a lot of their star players, and I don't think Alabama or LSU will welcome the A&M players to the SEC by going easy on them.

Just as the Longhorns have always remembered the score 13-0, the Aggies will now forever remember 27-25.
Posted by Zach DiSchiano at 11:59 PM No comments:

Tim Tebow is the Real Deal 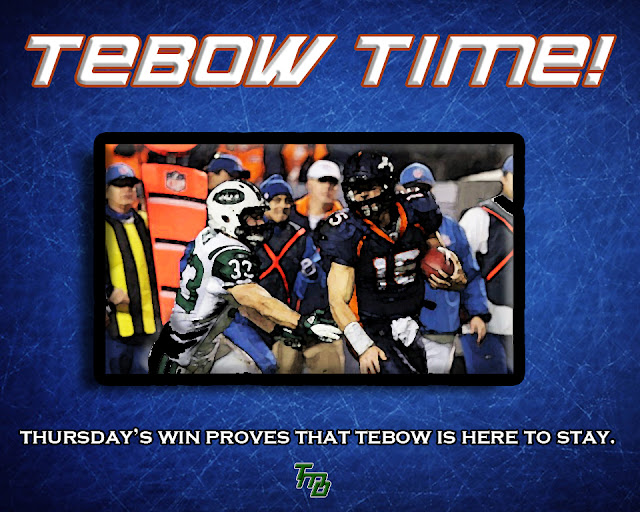 Skeptics,  beware! I have been on the Tim Tebow bandwagon since his sophomore year of college, and Thursday night's comeback victory over a very tough New York Jets team only solidified my support for the former Gator. As far as throwing is considered, well, Tebow might be one of the worst quarterbacks in the NFL. However, the last time I checked, the teams that make the playoffs are the ones with the most wins. And you know what? Tim Tebow is 4-1 as a starter this season, and that's more than most other quarterbacks can say right now.

What seperates Tebow from other quarterbacks in this league? His running ability. He's not the fastest guy on the field by any means, but he has enough power to shed tackles and muscle his way to a first down. It's not pretty, but the results are the only things that count. He's already rushed for 320 yards (6.7 yards per carry!) and two touchdowns this season.

As far as passing is considered, he's no Tom Brady, but look at the stats. 12 touchdowns, 4 interceptions. The coaches will take that ratio every day of the week. His completion percentage is obviously sub-par, but if you're not turning the ball over, you're giving the team a chance to win.

To all the people upset about commentators saying "Tebow won the game" when he under-performs in a Broncos victory, listen closely: If you've ever played sports in your life, you know that it only takes one guy to fire up the rest of the team. Tebow instills a high level of confidence in each and every one of his teammates, and that's all it takes for one player to make that tackle, or the kicker to hit that 50-yarder, or that running back to break that extra tackle and pick up the first down. It's the intangibles that make the greats, and Tebow has them.
Posted by Zach DiSchiano at 1:31 AM No comments: 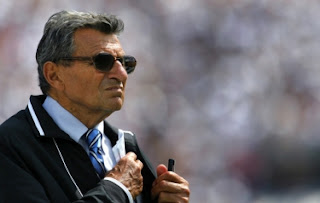 I've heard too many people wrongfully criticizing Joe Paterno and affiliating him far too deeply with this whole issue who have absolutely no idea what they are talking about. So let me break it down for everyone so we can stop blindly pointing fingers and accusing the innocent. Here are the facts:

1. Jerry Sandusky, a former Penn State assistant coach who retired in 1999, has been accused for 40 counts of child abuse.

2. On March 2, 2002, a graduate assistant told Paterno that he has witnessed Sandusky violating a 10 year old boy in the showers.

3. On March 3, 2002, Paterno calls Tim Curley, the Penn State athletic director, to his home the next day and reports what the graduate assistant had said.

4. Later that month, Curley and the vice president for finance and business Gary Schultz called the graduate assistant into a meeting and discussed the situation.

5. Curley and Schultz confiscated Sandusky's locker room keys and reported the incident to "The Second Mile", an organization founded by Sandusky that began as a group foster home dedicated to helping troubled boys and grows into a charity dedicated to helping children with absent or dysfunctional families.

6. No police question the graduate assistant until he testifies in December 2010.

7. On November 7, 2011, the Pennsylvania Attorney General Linda Kelly said that Paterno is not a target of the investigation into how the school handled the accusations.


Did Paterno cover up the incident? No. Did he report the incident as soon as he heard it? Yes. Could Paterno have done more to make this known? Maybe. The man did what he thought was best at the time. He even said,

"With the benefit of hindsight, I wish I had done more," Paterno said.

Paterno realizes now the actions he should have taken, but during that time frame he did what was appropriate and called attention to the matter.

I think that Sandusky should spend the rest of his pathetic life behind bars with an easily-annoyed body builder named Hank, but the foul words and hatred shown towards Joe is just not fair. If you're going to be furious, focus your rage on Sandusky, not every single person affiliated with Penn State.

Now entering November, most of us college students are starting to get into the depth of our classes, meaning longer hours in the library and less time for recreation. This may not be true for everyone, but it certainly is for me. That's why you haven't seen a post from me in a few weeks. Don't fret, though, friends, for I have come up with a wonderful idea to combine school and sports for an awesome story.

I am going to give out letter grades to certain teams based on their performance compared to their expectations. Hope you enjoy! And remember, Professor DiSchiano doesn't give grades, teams earn them. 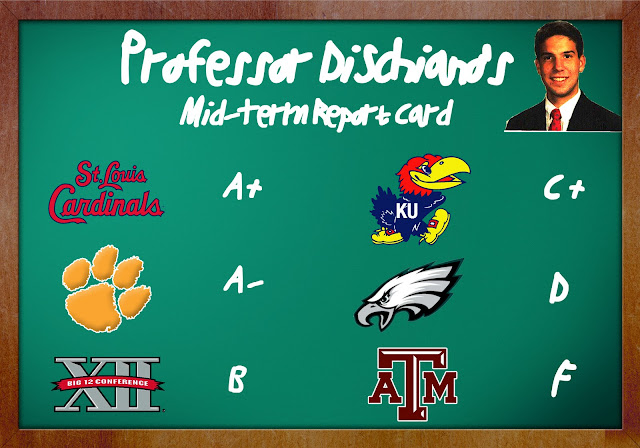 Not only did the Cards win the World Series, they won when the Rangers were just an out away from the title - twice! St. Louis conveyed the meaning of resilience, winning with class and heart. A great World Series with two great teams; certainly a treat for all sports fans alike.

Starting out the college football season 8-0 with wins over the defending-champion Auburn Tigers, Florida State, and Virginia Tech, the Tigers established themsevles as national title contenders. Will they make an appearance in the BCS National Championship? Probably not. Even if they win out, they're still in a weak conference in the ACC, so the BCS isn't likely to recognize their strength. Good team, but not A+ caliber.

You can wave goodbye to Texas A&M (which may not be such a bad thing after all) and Missouri looks to be parting ways (be careful what you wish for, Tigers), but the Big 12 has made up for its future losses by adding some very solid schools with TCU and West Virginia, and there's still rumor that Louisville will be on board as well. When you add Kansas into that mix, you're getting closer and closer to a powerhouse basketball conference.

The preseason AP Poll has come out, and the Jayhawks are feeling no love from the voters. Ranked 13th, this Kansas team has something to prove coming out of the gates, and we'll just have to wait and see if they were placed accordingly.

They're 2-4, Michael Vick is playing like he did in his rookie year, and the defense is handing out points like candy. If they don't shape up now, the players of this proclaimed "Dream Team" will only be playing in the Super Bowl in their dreams.

Is there a grade lower than "F" that I can give? How about "H" for "helpless"? "I" for "inconsistent"? "Z" for "Zach thinks that you are all incompetent football players who can't hold on to a lead to save your lives, and for some reason you think that you will fare better against SEC teams when you can't even leave the middle of the Big 12 standings"? Pitiful. I really do want to see the Aggies succeed - they're a talented team with a great coaching staff and excellent fan base -  it's just so frustrating when they continue to underachieve yet act as if they are number one in the polls.


With all that said, I'm naming the Cardinals my teacher's pet and sending the Aggies to detention. Any questions?
Posted by Zach DiSchiano at 8:46 PM No comments:


I spent a solid four hours or so teaching myself the complexities of this wonderfully frustrating program called Adobe After Effects. The details put forth into this video are countless, and I must say I have so much more respect for the people who do this every day for a living. Those guys are geniuses. Hopefully I'll get there one day - but for now, baby steps. Remember, whether you think you can or can't, you're usually right.
Posted by Zach DiSchiano at 10:52 PM 1 comment:

The Top 5 Most Overrated Players in the NFL 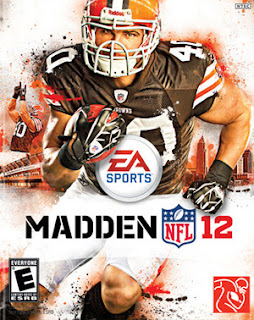 Is there a reason the cover of Madden is a Browns running back that averages 65 yards a game?


The Top 5 Most Overrated Players in the NFL

The Ravens are winning games...but is it really because of Joe? He's the second-worst quarterback as far as completion percentage goes, and he's turned the ball over as many times as he's thrown for touchdowns this season.


In the preseason, all we heard were talks of the resurgence of this Tampa Bay offense, and instead we get twice as many interceptions as touchdowns. If it weren't for that running game, the Bucs might be in the same position as the Colts - last.


You can call it the Madden Curse, but I never had faith in Peyton to begin with. He's missed a game because he was "sick", and in his other three games he's average a measly 3.6 yards a carry with two touchdowns and a fumble.


One week he's a top five quarterback, the next he's no better than Jon Kitna. He's thrown for seven touchdowns, but also five interceptions - two of which were returned for touchdowns and eventually lost the Cowboys a game.

He's the worst running back as far as yards per carry goes (3.0), he averages just 29.8 yards a game, and he has still yet to score a touchdown on the ground, and he's already lost his starting job to Daniel Thomas. He may have won the Heisman a few years ago (which was revoked) but because this was probably his last chance to make a name for himself, Reggie Bush will never reach the stardom that appeared to be inevitable when he left USC.
Posted by Zach DiSchiano at 5:53 PM No comments:

How many games will Texas A&M win in the SEC next year?